Last week on Tuesday I was sad because I said goodbye to Huw and to his dog Chopper because they went back to the UK. Huw was my Maths and Geography teacher from 2020 until 2021. He is born in Wales, country that he told me it is very beautiful and I need to visit it and to be the first one in the top of the countries where I want to travel!

I was very fascinated of Huw because he traveled in 90 countries on the all continents except Antarctica! I went with Huw to school every day of last year, since we moved to Greenfield until this year in June when the school ended. I talked with him everyday about traveling and about his friends.

At the beginning of last year Huw gave me all of his passports because he knew I was very fascinated of passports and he asked me to create a table with every countries he visited and to enter the distances he traveled on his flights. Huw reached 1 million kilometers by airplane this summer!

I was able to fill in this table because I searched the entry dates on the passport customs stamps, but it was a little difficult to find the entry dates from the countries in the European Union – where until 2021 (Brexit) British citizens didn’t get stamps in the passport. I finally found them and I was able to finish the table with his travels. The table is updated now and includes all of his travels. I know that he writes a diary, maybe after some time he will write a book and the data that I collected may be useful to him.

I talked a lot with him about the places where he traveled and he worked as a teacher. He taught in Tanzania, China, Thailand, France and after he came to Romania.

Huw gave me as a present some banknotes from a few countries where he have been because he knew that I was collecting. The most special banknote that he gave me was from Zimbabwe, it was valued of 50 billion of Zimbabwean dollars from the year 2008. At that time Zimbabwe was the country with the highest inflation in the world!

Huw showed me a lot of photos from many places, that I liked very much!

In the next years he began to travel to some countries in Europe and in 1994 he traveled to Asia and also in Australia. He returned to UK and began to teach and later he went to Tanzania where he stayed two years.

In Thailand there were a lot of street dogs and from there he found and adopted Chopper who is now nine years old. I like very much Chopper because he is a very good dog and he loves people. I love him very much because in the last two years when Huw traveled in the holidays Chopper stayed with us. I miss him very much !

After Huw lived in Thailand he moved to France in 2017 where he also took Chopper by plane from Thailand to Amsterdam. In 2019 he came back to Wales and in 2020 he moved to Romania. Huw and Chopper were a part of my life in the last two years, I felt so happy having them next to me!

Last year when Huw was my Maths teacher, he taught me about probabilities and I say that the probability to run out of Chopper was very high, because at the beginning I was very scared of him, and now is zero, because I got used to him and he even slept in my bed many times.

Huw agreed to be on the camera for our documentary Faces of Autism, which we screened for the first time on April 14th and he also had a speech at the opening of my photo exhibition.

Last year a meet also Huw’s friend, Caroline, she lives in Manchester. She traveled to Romania many times to visit Huw. This year when she visited Huw at the beginning of June they both went to my exhibition from the Map Museum.

I talked with Huw about the countries that I would like to visit and he told me the countries that he liked the most: Ethiopia, New Zealand, Nepal, India, Thailand, Argentina, Brazil, Indonesia, Oman, Lebanon, Tanzania, Bolivia, Iceland, Israel, Kyrgyzstan, Uzbekistan, Cambodia, Colombia, Mozambique, Guatemala and Nicaragua.

He told me that these countries are special and they really have to need to be high on my bucket list of countries that I want to visit.

I miss Huw and Chopper very much and I can’t wait to visit them next year in England! Huw also invited me to visit him on my own, when I will be 18 years old to show me Wales and England. I already prepared a route on the book about Wales that he gave me as a present before he left.

Thank you Huw and Chopper for the wonderful moments that we had together! 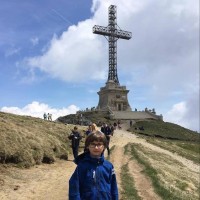